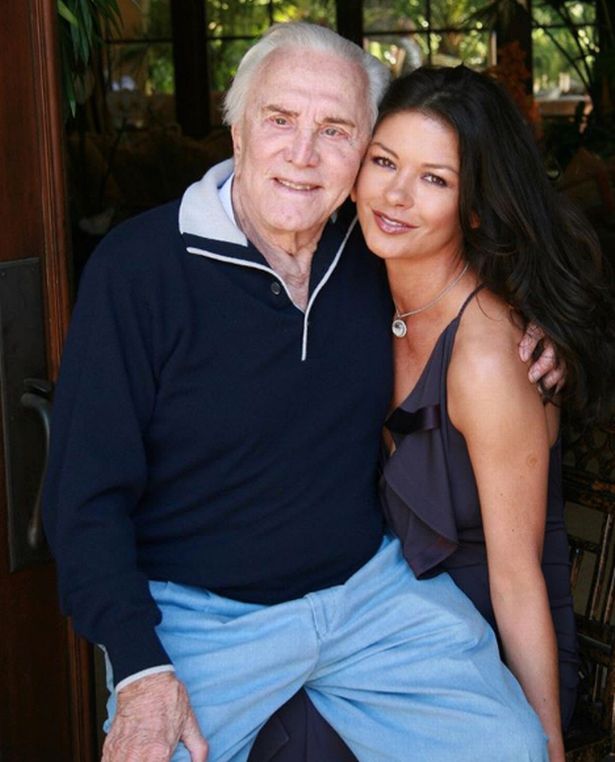 Catherine Zeta-Jones told her father-in-law Kirk Douglas how much she loves him as he celebrates his 103rd birthday.

The Welsh actress, 50, took to Instagram to share the amazing landmark birthday with her followers with a sweet tribute to him.

A photo of the pair of them looking very happy was captioned: "This guy on my knee, is 103!!!!! Happy Birthday Pappy!!! I love you with all my heart," as the Ocean's Twelve star finished with a heart.

Catherine's 'Pappy' perched on her knee as they both smiled for the camera in a heartwarming snap.

She shared a very similar post last year as the famous retired actor and producer hit his 102nd birthday – he was born in 1916.

Zeta-Jones' husband Michael Douglas, 75, was begged by his dad not to throw him a huge party to celebrate turning 103-years-old.

Instead Kirk pleaded desperately for a normal dinner with the family after previously having so many lavish parties.

"So now he's begging me, he's got tears down his eyes," Michael continued.

"Let's just have dinner, the family together. Bring the kids."

Catherine and Michael have been happily married for 19 years, making them one of the longest-standing couples in Hollywood.

They share a 25-year age gap, but that hasn't stopped their loved-up marriage.

They later had a daughter together – Carys Zeta Douglas – who is now 16-years-old.