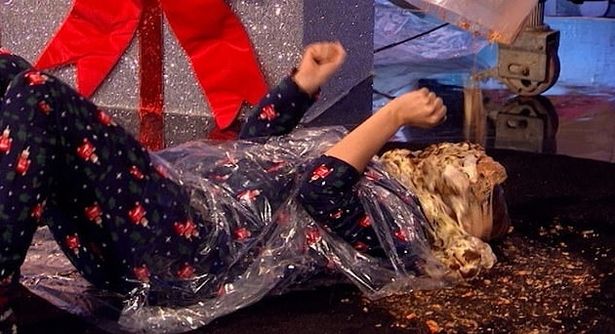 Holly Willoughby will be seen putting on quite the bizarre show during this year's Celebrity Juice Christmas special.

Airing on ITV2 tonight, it's set to be a messy one as the 38-year-old This Morning presenter licks Loose Women's Stacey Solomon's face.

In a first look clip it shows that the What's In The Tube round has been transformed into a more festive theme and called, What's In The Christmas Tube.

Stacey is showing lying underneath as she's covered in plastic sheeting and looking nervous as she braces herself for whatever seasonal mess is about to coat her.

Plummeting down the tube, Stacey grimaces as she's covered in a sickly tiramisu, unbeknownst to her what it is.

The 30-year-old licks her lips as she tries to guess what the substance is, saying it tastes like banana.

Curious, team caption Holly rushes over to Stacey to have a closer look, while she's decked out in wintry tartan pyjamas.

Host Keith Lemon says: "I'll give you a point if you can guess it!"

Holly then proceeded to lick Stacey's face and guessed correctly, "that's tiramisu," she called out.

The other guests featured in the Christmas special include team captain Mel B, Paddy McGuinness, Kelly Osbourne, Gino D'Acampo and Will Mellor.

It will be a step away from her This Morning co-host Phillip Schofield who has hit headlines this week over an alleged feud between him and presenters of the ITV show.

According to sources, his relationship with Holly has "become strained over recent months".

The reports also claim that co-star Ruth Langsford has logged an official complaint about Phillip after he interrupted her live on air.

For the last couple of days Phillip has kept a quiet profile across his social media platforms after The Sun claimed a number of ITV presenters have spoken to them about a "toxic atmosphere" behind-the-scenes of This Morning.

The publication claims one household name said: "For so long people have been silenced because they are scared for their job.

"If they speak out publicly about the atmosphere they fear there could be repercussions."