Looking to by an Oculus Quest? You'll have better luck in February 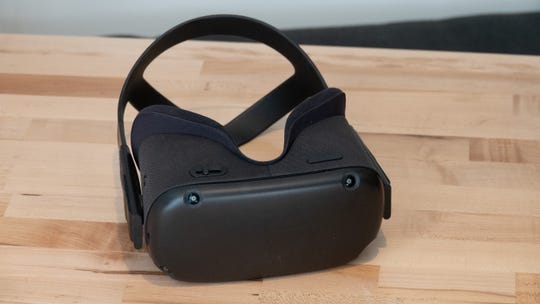 If you’re looking for an Oculus Quest this holiday season, good luck finding one.

Unless you’re willing to pay top dollar, that is.

The popular VR headset from Oculus normally sells for $399 (64 gigabyte version) or $499 (124 GB version) at retailers like Best Buy and Wal-Mart. But many brick and mortar stores are running out of the headset, and the secondary market is taking notice, with Quest prices up around the $700 mark on Amazon and eBay.

For some shoppers, buying a Quest has been a great undertaking.

Carrisa Nazario’s 12 year old son told her two weeks into December that he wanted a Quest for Christmas.

Unable to find one in a local store after two days of “work,” Nazario, of Joshua Tree, Calif., said she joined two Oculus Facebook groups and downloaded an inventory monitoring app called The Tracker to help stay on top of newly available Quests.

Nazario was able to order a Quest from Best Buy, Wal-Mart, and Amazon, but they were not set to arrive until mid-January. She canceled the Best Buy and Wal-Mart order when she got a notification that the Quest shipping from Amazon would arrive by Christmas.

Since finding a Quest on Amazon for its original list price, Nazario said she has kept in contact with members of the Oculus Quest Community Facebook group, offering advice on how to get one. Her top tip: stay alert, and pay attention to notifications The Tracker app, even at 2:00 a.m.

“Other members are asking me, ‘how’d you get it for only $400 on Amazon?'” Nazario said. “I guess I just got got lucky when the world was sleeping.”

Oculus released its Quest headset back in May, quickly selling out at major retailers, and demand has been high ever since. Current orders for new Quests are on backorder until February 10.

Unlike its predecessor, the Rift, the Oculus Quest has seen higher demand because it is more user accessible, according to Michael Pachter, a media and electronic analyst at Wedbush Securities.

“The Rift never was particularly popular because the system specs were so high, the price was high, there was limited software available, and the system was tethered with a long cord,” Pachter said. “The Quest is untethered, is reasonably priced, and there is a lot more software, so a higher level of interest is warranted and was frankly expected.”

Nazario said she almost regrets cancelling the other orders for Quests, because she might want one for herself. For now, she said the one coming for Christmas will offer a good way to spend time with her family.

“I think we’re going to have fun with it,” Nazario said.

Email ThisBlogThis!Share to TwitterShare to FacebookShare to Pinterest
Labels: an, by, Looking, Oculus, Quest?, to