Thunderstorms mean a White Christmas 'not on cards' 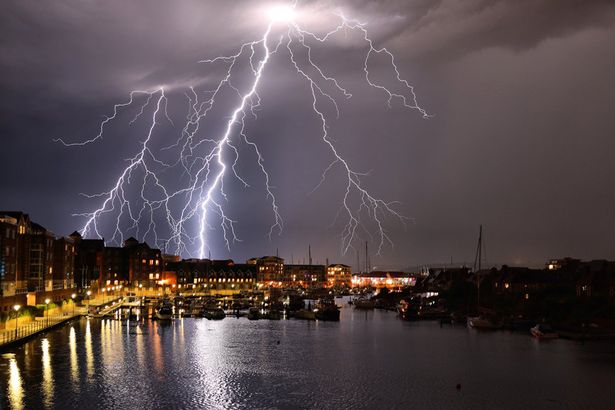 Almost all parts of the UK can expect fine weather on Christmas Day – but before that thunderstorms are expected today.

Before the arrival of the pleasant conditions on the big festive day, thunder is forecast to hit parts of south Wales and south-west England today, according to the Met Office .

After a frosty and foggy start to December 25, people in most parts of the country are likely to see the wintry weather lift and make way for sunshine.

A white Christmas is not on the cards, according to the forecaster, and only mountainous areas in Scotland stand a chance of seeing any snow.

A severe yellow weather warning has been issued which states that there may be damage to a few buildings and power outages, with delays to journeys by rail or road also possible.

"Christmas Day is looking like a lovely day for pretty much the whole of the UK," according to Met Office forecaster Greg Dewhurst.

"It will be a cold start in the morning with some fog, but once that clears we are looking at a dry day across the country with sunny spells."

Peak temperatures are likely to range from around 6C in northern parts of the UK to around 9C in the south, he added.

The thickest of the morning fog is likely to be in Wales and central and western parts of England.

There have only been four occasions over the last 51 years when the UK has had a widespread coating of snow on the ground on Christmas Day, according to the Met Office.

It is highly unlikely that there will be any significant snowfall this year, Mr Dewhurst said, adding: "If there is any snow it will be over the tops of Scottish mountains, which we don't class as a white Christmas."

The last time that there was a "widespread" white Christmas in the UK was in 2010, according to the Met Office.

But 2017 was also technically recorded as a white Christmas by the forecaster after 11 per cent of weather stations reported snowfall, however none said that snow had settled.

Last year there was no record of snow falling at any weather station in the UK.

The Met Office has to record a single snowflake falling at any one of a number of observation locations in the UK including Buckingham Palace, Edinburgh Castle and the Millennium Stadium in order to class a Christmas as white.

This has happened on 38 of the last 54 Christmas Days.

Today, heavy showers are expected in Wales and southern England, as well as thunder and hail in the southwest.

According to Meteorgroup UK, tonight will be mostly dry with clear skies but there will be cloud and a few showers across south Wales, south-west England and along the south coast during the evening.

There will also be a few showers in northern and western Scotland, especially around coasts, but clear for most by dawn and with gentle winds.

Wednesday will be dry and sunny for the vast majority in the morning while there will be a few mist or fog patches in the west and isolated showers are expected in northern Scotland.

In the afternoon it will remain sunny for most although cloud will develop in some western areas and foggy for many overnight.

Thursday will be mostly cloudy with rain spreading eastwards and there will be hill snow in Scotland as well as brisk south-westerly winds.

On Friday cloud and patchy rain is expected in Scotland, Northern Ireland and northern England, while Wales and southern England will be mostly dry with sunny spells but some breeze.