You could be fined £5,000 for driving through puddles and splashing pedestrians 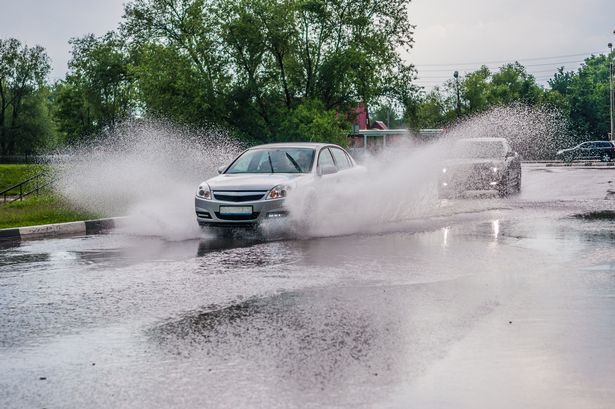 Motorists could be slapped with a £5,000 fine for driving through puddles if they splash pedestrians, police say.

It is illegal to drive “without reasonable consideration for other persons” and to “drive through a puddle causing pedestrians to be splashed", under the Road Traffic Act 1988.

The fixed £100 penalty for the offence can rise to £5,000 if the driver’s behaviour is found to be “an act of incompetence, selfishness, impatience, or aggressiveness".

Drivers could also be handed between three and nine penalty points on their licence, Gloucestershire Live reports . The advice also states the offender should be offered driver education in most cases.

The CPS's charging guidelines cites splashing pedestrians as an example of driving that should lead to a charge.

When have police acted?

Earlier this year, police issued an appeal to find a motorist who soaked a mother after ploughing through a puddle in Cambridgeshire.

The mother was with her two children, including one in a pram, when a car drove through the 20ft-long puddle and splashed all three.

A spokesman for Cambridgeshire Police said at the time: “On Thursday, January 4, around noon, a mother was with her two children, one in a pram and the other walking alongside her near the junction of Pig Lane and Greengarth in St Ives.

“Due to the poor weather a very large puddle had built up due to a blocked drain near to the junction which was half way across the road. It was not raining and the puddle, some 20 feet in length, could easily be seen by motorists.

“Unbelievably a motorist drove through the puddle causing the water to soak the three.

“The driver could well have waited to drive around the puddle or driven through it very slowly so as to not cause water to splash anyone on the footpath.”

She said: “Firstly, drivers have no way of knowing what the road surface is under the puddle, causing unpredictable driving conditions.

"Secondly, the water itself can cause the car to aquaplane – where the vehicle’s tyres fail to grip the road and cause the driver to lose control.

“If that isn’t enough, it’s also just incredibly rude and drivers can be penalised, quite rightly, with a huge £5,000 fine.

“Puddle rage really can lead to big fines. To avoid this cost and to ensure their safety, we advise motorists to look out for big puddles when driving, and pay particular attention when there are pedestrians around.”

Email ThisBlogThis!Share to TwitterShare to FacebookShare to Pinterest
Labels: £5, 000, be, could, fined, For, You